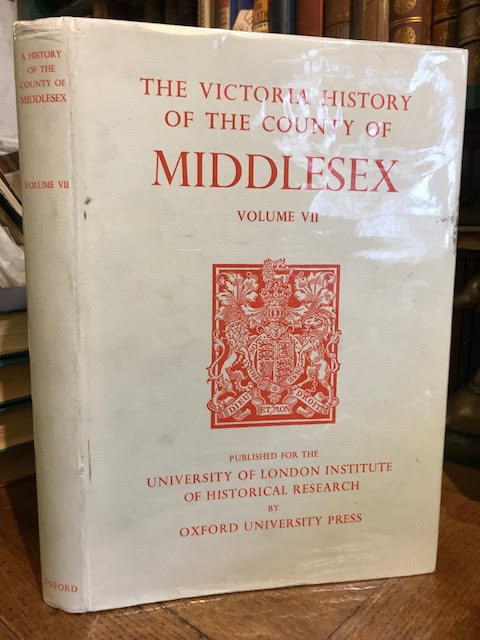 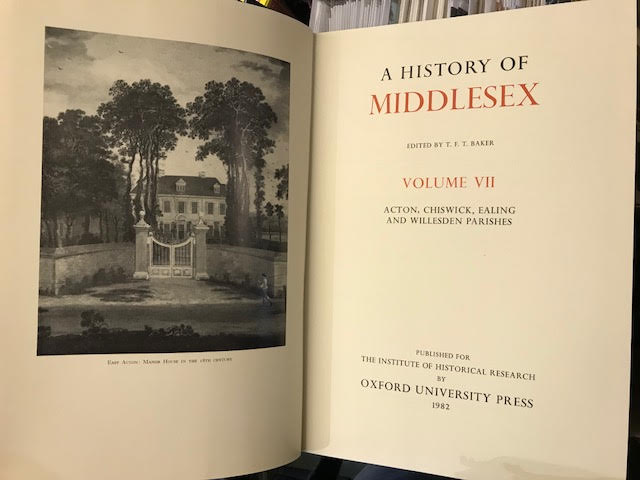 The Victoria History of the County of Middlesex Vol. VII ( 7 ) : Acton, Chiswick, Ealing and Willesden Parishes

xx., 280 pp. A few marks to the jacket, but otherwise a very good clean copy. The volume completes the coverage of the administrative county of Middlesex as it existed until 1965, with histories of the parishes of Acton, Chiswick, Ealing, West Twyford, and Willesden, together forming the outer part of the Kensington division of Ossulstone hundred. The article on Ealing covers Old Brentford, in Ealing parish, and New Brent-ford, a chapelry which formed the southern part of Hartwell parish, in Elthorne hundred. Before their inclusion in Greater London the parishes embraced the municipal boroughs of Acton, Brentford and Chiswick, and Willes-den, and part of the borough of Ealing, with a total population of some 250,000. The area lies between the river Brent and the Thames, stretching from Edgware Road in the north-east to Brentford High Street. Many estates belonged to the bishop of Lon-don or to prebendaries of St. Paul's cathedral. Brentford, owing its prosperity to the Thames, to roadside inns, and to the market gardens of its hinterland, was the largest centre by the 17th century, when good access to the royal palaces and to London drew prominent resi-dents to Chiswick and Ealing. Most of the land was built over in the late 19th and early 20th centuries, when Ealing claimed to be the queen of upper-middle class suburbs. Mean-while the decline of Brentford was followed by the growth of industry in much of Acton and W illesden. The modern scene is mainly one of sub-urban housing, intersected by railways and busy roads, including the M4 motorway. Contrasts nonetheless abound, with factories at Park Royal and along the Great West Road, shops and offices in Ealing Broadway and Chiswick High Road, tower-blocks and decayed terraces at Kilburn, the early garden suburb of Bedford Park, the riverside 'villages' of Old Chiswick and Strand-on-the-Green, and the landscaped grounds of Gunnersbury Park and Chiswick House. 0197227562

The Victoria History of the County of Middlesex Vol. VII ( 7 ) : Acton, Chiswick, Ealing and Willesden Parishes