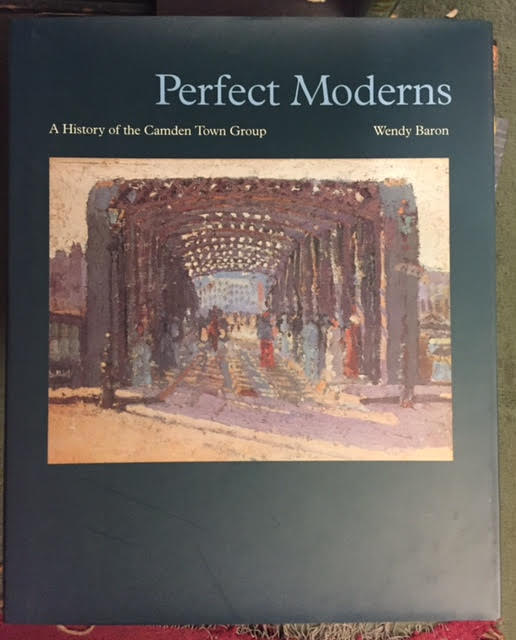 Perfect Moderns : A History of the Camden Town Group

224 pp, illustrated in colour Camden Town, in north-west London, gave its name to a style of painting and to a society of artists - the Camden Town Group - which held three exhibitions in 1911 and 1912. Both the style and the idea of creating an exhibiting society were formed by the interchange of ideas and influences at 19 Fitzroy Street, where in 1907, Walter Sickert first organized a number of painters - the Fitzroy Street Group - to contribute jointly to the rent of a studio. The style encompassed paintings domestic in scale, unpretentious in subject matter, informal and lively in execution. Its favourite themes included humble models, nude or clothed, shabby bed-sitters; domestic still lives; London townscapes and landscapes studied on visits to the country and abroad. Sickert's own sombre paintings, in particular the Camden Town Murder series, have come to represent the group's oeuvre but, in this text, the author explores the range of work created through and beyond the heyday of Camden Town painting by his younger colleagues, in particular Spencer Gore, Harold Gilman, Charles Ginner, Robert Bevan and Malcolm Drummond. She traces not only the history of the Camden Town Group, but also how its disingegration and reabsorption by the Fitzroy Street Group spawned the London Group in 1913. Her account aims to give substance and context to the rival societies, conflicting allegiances and changing priorities of painters before the outbreak of war in 1914. The volume contains full catalogues of publicly owned paintings by Walter Bayes, Bevan, Drummond, Gilman, Ginner, Gore, J.B. Manson, J.D. Innes, Maxwell Gordon Lightfoot and William Ratcliffe. 184014291x

Title: Perfect Moderns : A History of the Camden Town Group

Perfect Moderns : A History of the Camden Town Group